We can’t wait for governments to act

An Australian first economic study into the long term  impacts for future generations of not providing housing for all. 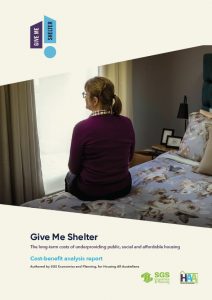 Housing All Australians was established to facilitate a private sector voice, through a commercial lens to advocate that the provision of housing for all Australians is fundamental economic infrastructure upon which to build a successful and prosperous economy.

Housing All Australians (HAA) is a private sector registered tax deductible (DGR1) charity that believes it is in Australia’s long-term economic interest to provide housing for all its people; rich or poor.

Just like the provision of roads, schools and hospitals – safe, affordable and stable housing for all our people is fundamental economic infrastructure.

Australia’s chronic shortage of affordable social and public housing is set to create an inter-generational time bomb where the future economic costs of managing the unintended consequences of homelessness, such as mental and physical health, family violence, policing, justice and long-term welfare dependency, will explode.

An economic study on the long-term costs of underproviding public, social and affordable housing